The Business Cycle and Buying a Home

There are times when the economy is brisk and everyone feels confident about his or her prospects for the future. As a result, they spend money. People eat out more, buy new cars, and…

Then, for one reason or another, the economy slows down. Companies lay off employees and consumers are more careful about where they spend money, perhaps saving more than usual. As a result, the economy decelerates even further. If it slows enough, we have a recession.

During such a time, fewer people are buying homes. Even so, some homeowners find themselves in a situation where they must sell. Families grow beyond the capacity of the home, employees get relocated, and some may even find themselves unable to make their mortgage payment – perhaps because of a layoff in the family.

If you are lucky enough to purchase a home during a slow period, you can be reasonably certain the economy will begin to show strength again. At times, real estate values may even surge drastically. In many regions of the country, this is precisely what occurred in the late eighties and nineties.

Should You Try to “Time the Market”?

One problem with attempting to time your purchase to the business cycle is that no one can accurately predict the future. Another challenge is that interest rates are generally higher during a depressed market and income may not be keeping up. For that reason, fewer people can qualify for a home purchase than in more prosperous times.

Why You Should Not Wait

Plus, this strategy generally works best for first-time buyers. People who already have a home usually need to sell it in order to buy their next one. If a “move-up” buyer wants to buy a home during a depressed market, that means they usually have to sell one during the slow market, too. If a seller wants to sell his home to take advantage of a “hot” market when prices are fairly high, they generally have to buy their next home during that same hot market.

It tends to equal out.

Finally, the business cycle can change over time. Since 1983, we have had two fairly long expansions with only a slight recession in between each. You would not want to wait nine years to buy a home, would you? You could miss out on a substantial amount of appreciation by waiting, and end up paying much higher prices. 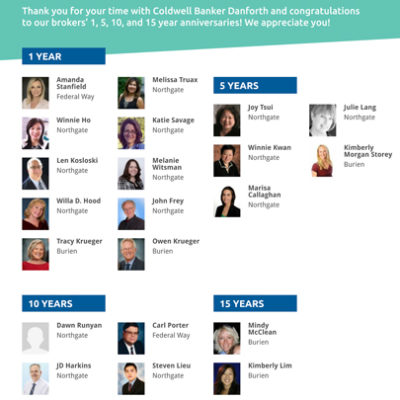 Happy anniversary to 23 of our Coldwell Banker Danforth brokers!

Thank you for the great service you provide to your clients and our communities. Happy anniversary to our long-term professional…Continue Reading

View All
Find A Home Find An Agent
X
X